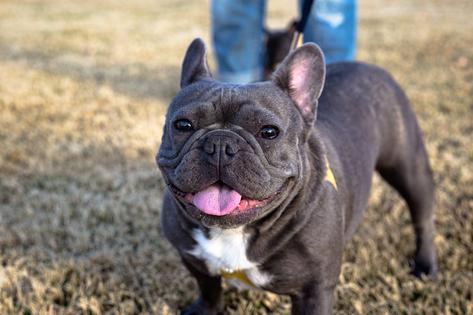 Bonnie Bleu aka BeBe  (below) 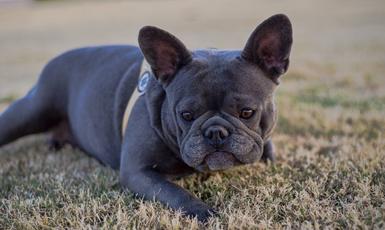 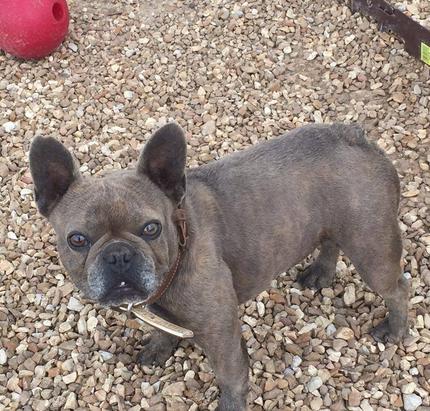 THREE  BLUES IN A BED 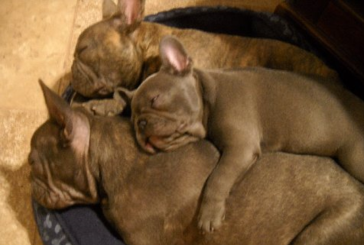 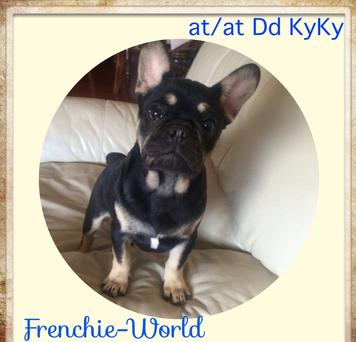 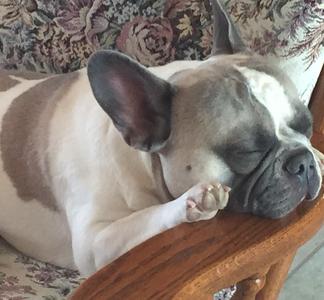 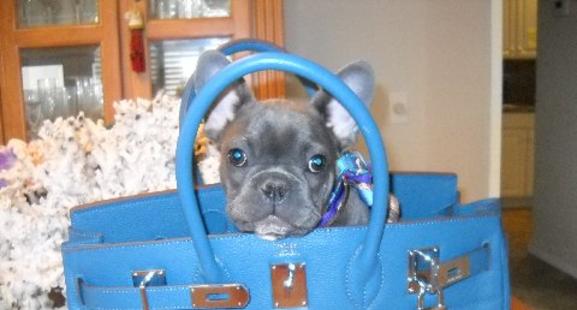 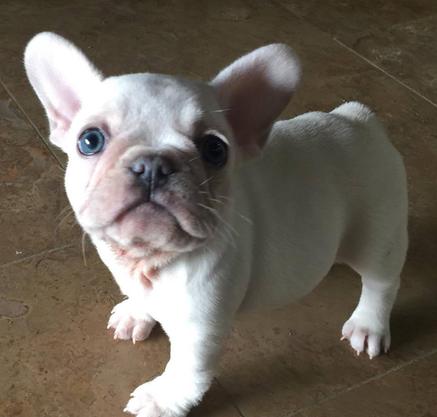 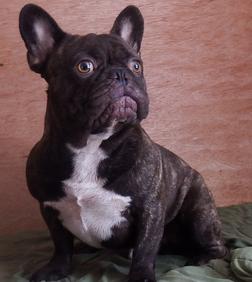 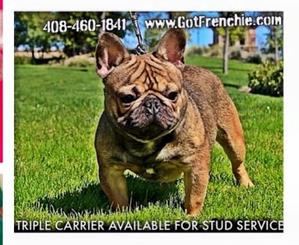 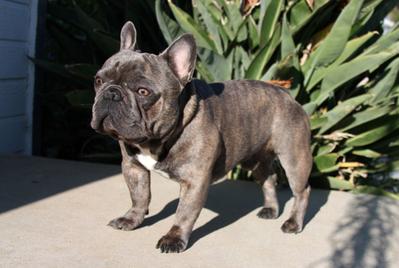 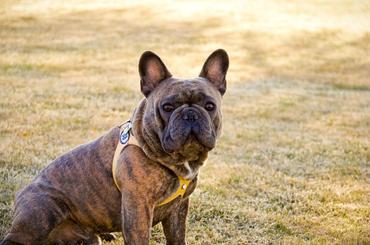 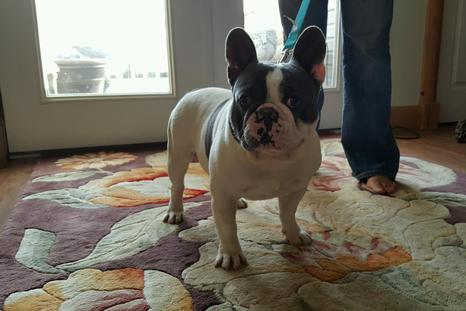 OUR GIRLS/BOYS COME FROM SOME OF THE MOST RESPECTED LINES AVAILABLE... 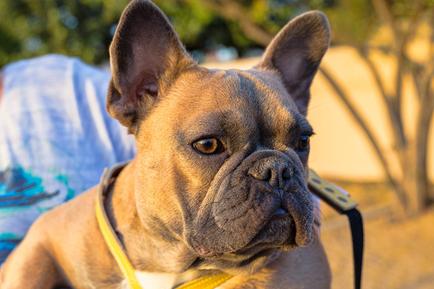 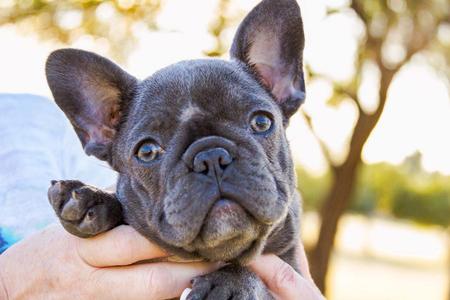 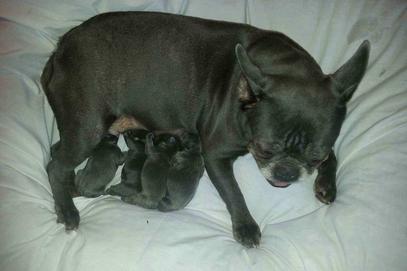 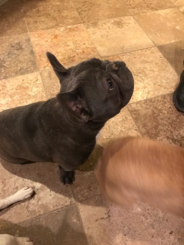 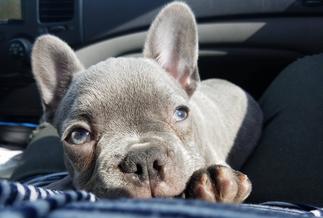 About our decision to breed blues/lilacs/fluffy and other "exotics"

(SCROLL DOWN TO SEE PICTURES AND INFORMATION ON OUR EXOTICS)

First of all we would like to start by saying....We are responsible breeders, we are aware that every French Bulldog is NOT meant to be bred.  For this reason when selecting our males & females for our breeding line we ONLY choose the very best quality Frenchies.  We ONLY select dogs without health issues or problems and those that represent what we consider to be the BEST standards and characteristics of the breed.    Our  "Exotic" (Isabella, Fluffy, etc.) and "Blue/Lilac Bloodlines" just like our Standard Colors come from some of the most elite, respected and sought after lines available  "Brad's Bullies ("Igor",  "MicroMachine" and "Maximis"); CEC Bullies ("Mr. Attitude", "Lockstock", "Zelle", "El Pappi", etc.), "West Coast Rare French Bulldogs";  PineRock Frenchies ("Yolo" and Drip") just to name a few ) we are very proud of them - our goal is QUALITY FIRST - Color second.  We do extensive health testing -- DNA testing,  Orthopedic Foundation for Animals (OFA) Certification and regular Vet Inspections/Certifications on all of the dogs in our breeding program.

Some ask, "Why are French Bulldogs so expensive?"   These are just a few of the reasons why and for these reasons more buyers should be careful when purchasing from a breeder selling "cheap puppies."  The majority of these type of breeders ONLY care about the money, NOT the health of the dog.

We have owned French Bulldogs for almost 18 years and NOT one of them has EVER had serious life threantening health issue.   We give our dogs the best of care, nutrition and quality of life with our family.

We think the exotic and lilac/blue French Bulldogs are just beautiful and striking but wouldn't breed them just for that reason.  We  wanted to be sure that we could produce and offer only healthy puppies breeding French Bulldogs, which is why we spent a vast amount of time researching these beautiful and rare colors before adding them to our breeding line and why we are sharing this information with you.

What we discovered about the blue is, the blue (gray) color comes from a rare gene called the dilute gene (d) which changes the coat color from black to blue (gray) and is also responsible for the change in the eye color.  It is this rare gene (d) that makes the blue French Bulldog rare and is why there is a higher price tag for the blue, chocolate or lilac colored French bulldogs than the regular or "standard" colored French bulldogs.  They are NOT more expensive because blue breeders  want to scam you into thinking they are rare because they are a "defect of the breed" - THIS IS SIMPLY NOT TRUE!!  We have invested ALOT in our breeding program to produce the best QUALITY puppies available.

We LOVE the blue French Bulldogs!!  Again, we have been an excessive amount of times researching the dilute gene(d) that's responsible for this beautiful and rare color and held off purchasing a blue because of all the negative controversy about them and their so called health issues that are rumored to be related to this blue dilute gene (d).  What we found in all our research is there is NO PROVEN FACT that the blue coat has anymore health issues than the normal or standard colored French bulldog.  Does this mean that no blue French bulldog will ever have a health issue?  Of course not, but we feel that our findings  have proven that the coat and eye color of the dog has no correlation with health issues and are NOT RELATED.   That the health issues in the blue color is NOT due to coloring, but to poor breeding judgment and inbreeding.  Our findings lead us to believe that one should be more concerned with the quality of the dog and the integrity of the breeder rather than the dog's eye and coat color.

You might ask ....Why are blue French bulldogs not allowed in the breed standard?  The ONLY answer that we have been able to get when we ask this question is, the blue color in a French bulldog is considered to be an undesirable color, as well as the chocolate/liver colored French bulldogs which are also rare.  This may have been the case in 1911 when the disqualifications were first written, but it doesn't seem to be the case now.   Blue French bulldogs are more popular now then ever before and are in high demand.   It should be noted that blue French Bulldogs are accepted in the European Standards (which is where the breed originated) and there are some colored variations which are accepted by AKC which are not allowed within the European standards.

Our advise to anyone thinking about purchasing a blue French bulldog (or any French bulldog for that matter) is to consider the reputation and integrity of the breeder first and foremost and to be concerned primarily with the health of the dog rather than the color.  To research the facts fro yourselves, not to trust any one source or one side of this debate because everyone has presuppositions that influence how they view the subject.

We'd also like to add.....even though blue French bulldogs are disqualified from AKC shows due to the blue/mouse color and are not considered (by AKC) to be a standard of the breed - the blue French bulldogs can still be AKC registered with the American Kennel Club.  Gray and white or brindle is the available color for the solid blue/blue brindle, gray and white piebald - there is not a blue fawns or blue fawn piebalds therefore they would have to be registered under the regular fawn color.

Here is a link to a GREAT article written by a unbiased Biologist (who doesn't even own a Frenchie) which I believe says it all!